These successful entrepreneurs quit their job for doing business; Now their business is skyrocketed

One of the scariest things in life to do is to follow your heart and work towards your dream. However, these entrepreneurs have shown courage. They quit their job for doing business and now their business is skyrocketed. In recent times there are many individuals who are following their hearts and starting their businesses. The scenario has changed in the world overall.
Nowadays the startups are receiving more funding, people are getting more opportunities and the new jobs are being created. But on the other hand, many startups face terrible setbacks and fails. Although the path is tough some individuals dared to walk the path and fulfill their dream. We are bringing you some of the examples of entrepreneurs who left the job for their dream startup.
Also, these startups have performed very well in 2019. 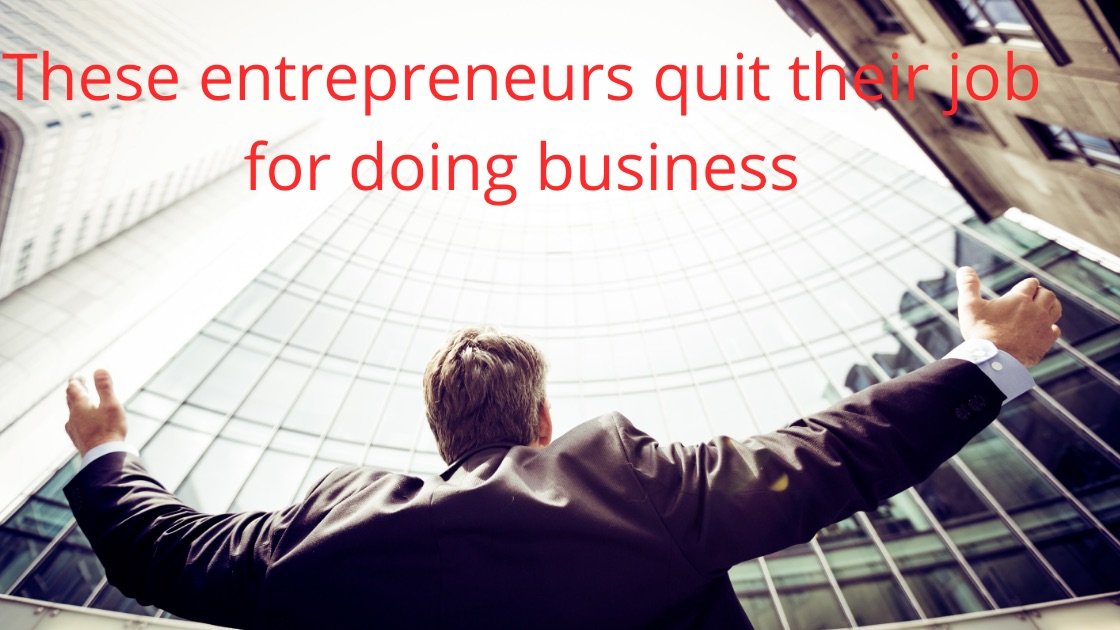 1)Falguni Nayar, Founder, and Ceo of Nykaa (Succesful entrepreneur who left the job at the age of 50)

Falguni Nayar was working in Kotak Mahindra as MD, A very good job and settled life. But her mind was willing something else. Hence, at the age of 50, she resigned. She always wanted to be an entrepreneur. She had realized the scope for online beauty and cosmetics market in India. In 2012, she started Nykaa, beauty products selling E-commerce company enhanced with beauty tips and advice.

The company’s valuation is over $750 million till the date. Revenue has grown from 10 million $ in FY16 to 157 million $ in 2019. At the age of 50, she established business and it’s growing rapidly. Many people advised her not to get into this business but she had a will as well as she had seen the bright future of the online market for beauty products. A big salute to her.

Gustavo thought babysitting is easy, but when he was blessed with a baby, he realized that it’s not easy to nurture the growth of a child. It is vast as well as a delicate thing. He got a motive from this experience to do something in the field of early childhood development. Hence, he and Juan Pablo Meija started ‘Babysparks‘  in the year 2013.  Gustavo was previously an investment banker with JP Morgan and Juan used to work as a technology consultant for the United Nations Development Program. They launched the app in 2014.
Various child activities are provided daily on this app according to the child’s profile registered on it. The team of Babysparks has done a deep study of early childhood development and it reflects in the content and performance.
BabySparks’ platform has been downloaded more than 3.5 million times by users living in 180 countries, according to the team. It has raised the funding to the $3M till the date.

If you are good at design, you can get paid royalty from the souled store. You just have to upload your design on their website, whenever the product which has your design get sold, you will get the royalty. The working of this website is very transparent. The website sells a large number of unconventional pop culture merchandise like graphic tees, backpacks, coasters, tote bags and stationary, etc. The company has raised the fund over $3million.It has a bright future because the fan-mania is never going to be stopped so as their sell.

While working as a data analyst Sumit Bansal, an entrepreneur from Delhi, became an expert in excel spreadsheets, he had the answer for different queries asked by his colleagues. He thought that it would be better to start a website of excel tutorials so that people could directly get the answer from there. He started the website ‘Trump Excel’ in 2013. It got traffic from all over the world and hence he started to earn good revenue from the website.
In 2015, he quitted his job and focused all his attention on the website. Since then, the progress of the website is unstoppable. Being a successful entrepreneur, Mr.Sumit Bansal believes in time and task management as well as asking for feedback. According to him, feedback from the audience gives the right direction to work, Sumit Bansal is earning about $10,000M monthly.

The two Iitians Amit Singh and Deepanshu Malviya left their good going job at Jabong to start their own business. After some days of the research, they launched the big potential startup ‘Shuttle’. ‘
Shuttle’ is based in Delhi, it provides bus service for public transport.
It provides comfortable rides to customers by their well maintained and air-conditioned buses.
Currently, Shuttle provides its services in Delhi, Pune, Mumbai, Kolkata, and Chennai.
It has raised the funds over $50 million to the date. It reported the revenue over Rs. 100 crore in the year 2019.

Jovim Ventura who was excelling in his career as a Sales & Marketing Analyst in the organization Surepayroll. This organization was an online payroll company that sold out for $115 million. Later Jovim quit his job because he wanted to have a company of his own. This urge of his creating business became one of the main reasons for him to face failure at least 7 times.
However, Jovim didn’t stop. He found the scope for the printing industry and thus started ‘InfoPrints’ from his parent’s house and use to work in the basement of his storefront. It took him 4 years to hire his first employee and 8 years to create to other firms known as CrowdSigns.com & SignMonk.com.Inoprints is extending the business in various countries.
It was in the year that Inoprints managed to generate revenue of $15 million.

It was after four years-long periods That Catherine Wood decided to work upon her dreams after working as a Senior Economist for the Federal Government. She says that it was becoming difficult for her work on the data comparison between the set of two computers.
Therefore she invested her savings in her new organization Unbounded Potential. This firm is dedicated to self-development and personal improvement of the personal self. Since the day of its foundation, the company is showing tremendous growth. Catherine believes that it won’t be possible if she hadn’t resigned from her secure and stable job and spent all her hard-earned money on this new organization.

Spencer Shulem was earning a huge amount being a Head of User Experience for Mobile & Desktop at the Procore which has a net worth around $500 million. Though he was the youngest employee in the firm, he had an urge to start his own company.
These feelings led Spencer to leave his old organization and start a new software company named WeDo, which was dedicated to making a simple to-do list applications. This application is used by many for personal use and collaborating with others. Recently the organization was successful in raising a funding of $1 million with the help of local investors.

After working as a Project Manager in a reputed organization 23andMe Afton Vechery decided to create a startup with Carly Leahy named Modern Fertility in the year 2017 intending to provide accurate information and data on the fertility of a woman. In the year 2018, the company received a funding of $6 million, but in the year 2019, the organization was successful in gaining an amount of $16 million from various investors.
The first product provided by this organization to its users was a home fertility kit that is used to tests the hormonal level of women. The company is situated in San-Fransico in the United States of America. Afton Vechery and Carly Leahy got listed themselves in the Forbes ‘Under 30’ Lists in the year 2017, because of their successful startup.

Lisa Chu started her career as a sales agent for an apparel company. Though she finds that job extremely fulfilling but still she had a deep desire to own a business. After spending almost a decade in the fashion industry she decided to launch a small clothing brand.
She founded Balck N Bianco, a clothing brand that was specially dedicated to children. The organization main focus was to create high-quality apparel for the kids. It took her two years to increase the audience of her brand and make a huge income out of it. In today’s times, Black N Bianco is doing great in terms of business and has a huge brand audience.

Mike Scanlin was a successful venture capitalist in a reputed organization in Silicon Valley. Though he was extremely satisfied with his job as it would pay him well. But due to an extremely tiring routine and a dream to create a business, he created Born To Sell after spending six years in his old organization.
One of the major challenges to establish his business was to raise funds for it, so he invested a major part of his savings into the organization borntosell.com. He has to hire freelancers to complete different parts of the website like SEO, affiliate marketing and coding, etc. After 5 years, this company has become a major source of his income and showing tremendous growth.

After working as a Program Manager at Akami Technologies which works towards the delivery of the content in the network business, Vienne Brown decided to found VienneMilano a company dedicated to fashion. Since Vienne was never a software guy he always had an interest in this field.
It took him two long years to increase his business audience. Vienne stated that it was his hard work and the quality of perseverance which allowed him to become successful in his business. In recent times the VienneMilano has become a huge success and also created an ample revenue this year.

Luke holden was working as an investment banker at Cohen & Steers in New York. His salary was around $12000 per month. One day he decided to quit the job. He was 24 years old at that time. There were two reasons for his decision. First, he was homesick, he wanted to stay with his family which was in Maine. And second, he wanted to start own business.
His dad had a business of Lobsters in Maine. Luke found that there was a scope for low priced and good quality Lobster rolls in the market. Hence he decided to start his journey with this business. With the help of his father and business partner Ben Conniff, he opened the first Luke’s Lobster shack in New York City. After that their journey is unstoppable. Now, Luke,s Lobster is operating at more than 50 locations in the USA & Asia. The company generates more than $50 million in revenue yearly.
ShareTweetPin ItShare